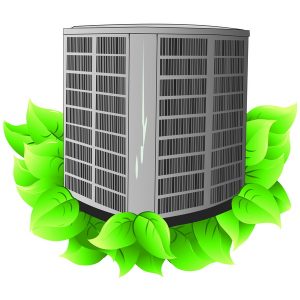 Why is that the case? What technological developments have allowed the current line of air conditioners (as well as heat pumps) to use less energy to run while providing the same cooling power? There are a couple of reasons:

If you have an air conditioner that was installed before 2010, it may use a refrigerant blend called R-22. This blend is being phased out. No new systems using R-22 are being manufactured, and the blend itself will stop being produced in 2020. The replacement refrigerant blend, R-410A, is not only better for the environment, it’s also a better heat transference fluid, helping ACs to run at greater energy efficiency. Because the price of R-22 is rising and it soon be unavailable entirely, we urge homeowners who have R-22 air conditioners to replace the units as soon as is convenient.

Not all new air conditioners have a variable-speed fan option, but it’s something customers should look into as an upgrade. The standard central air conditioner has a blower fan that runs on one speed. A variable-speed fan can power down to a lower level of operation, and does so automatically whenever it isn’t necessary to work at full capacity. Most blower fans will run on lower capacity 60% of the time. Not only does this save money, but it helps with a more even distribution of cool air around the home.

This is one of the most energy-conserving features a new air conditioning system have can have. These central air conditioners do not have to use the maximum power for the compressor all the time the compressor is running. The system will drop down to a lower capacity (much the same way a variable-speed fan does) to adapt to the conditions in a home. Because the compressor uses more power than any other component of an air conditioner, cutting down on how much power it uses helps immensely with increasing energy efficiency. Some multi-stage compressor ACs have higher than 20 SEER.

Bob Mims Heating & Air Conditioning has served Staten Island, NY since 1955. Talk to us today for a free proposal on all replacements.