What Is “Kettling” in a Water Heater? 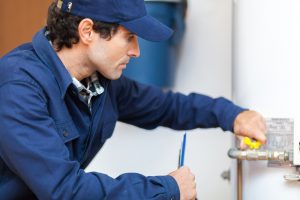 You’re accustomed to the sounds your water heater makes as it’s running. If an out of the ordinary noise disrupts this, it often indicates a problem requiring repairs.

The most common warning sound you may hear from the tank of a water heater is called kettling. The name describes the noise, which is similar to water boiling in a kettle. It’s alarming to hear, but the first thing you need to know is that there’s very little chance the water heater’s tank is about to “blow.” However, kettling is a warning that you need to call a water heater professional to inspect the system and have any necessary repairs done.

The Most Common Cause of Kettling

We know that to your ears kettling sounds like the water inside the tank has started to boil and soon pressure will cause it to burst and send water everywhere. What’s probably happening isn’t boiling water, but water bubbling up through a layer of sediment at the bottom of the water heater tank.

Sediment can build up in a tank because of a high amount of hard water minerals dissolved in the water supply. When the water heats up, it can no longer hold these minerals, which are released and float to the bottom of the tank. (They can also create limescale along the inside tank walls, which will turn into a serious problem of its own.) A sediment layer will develop along the tank bottom, which is right over the heat exchanger, i.e. where heat is introduced into the tank. A layer of water trapped between the sediment and heat exchanger will quickly heat up and bubble through the minerals, creating kettling.

You want this sediment removed from the tank because it will cut into the system’s efficiency. You may also want professionals to descale the inside of the tank to remove the build-up of limescale.

Other Possible Causes of Kettling

Kettling can come from actual overheating inside the tank—but again, you don’t need to fear for a burst tank. Sometimes the tank thermostat can malfunction and cause the system to overheat. The boiler may have been installed improperly, or be the incorrect size. You’ll want a professional to investigate, track down the cause of the sound, and fix it. (Yes, this may require getting a new water heater.)

Still Worried About the Tank Exploding?

We understand, but water heaters are built with safety devices to prevent this. One of the most important is the expansion tank on the top of the main tank, which is able to absorb most increases in pressure. Other precautions built into a tank water heater will shut it down before pressure goes too high. If your water heater shuts down abruptly, it might be one of the safety mechanisms. Let a professional inspect the system before you attempt to run it again.

As soon as you notice strange sounds from your water heater, call our experts for water heater repair in Staten Island, NY. We work with both tank and tankless water heaters.

Bob Mims Heating & Air Conditioning has served Staten Island’s heating and A/C needs since 1955. Look to us when you need water heater repairs.